A substantial change in medical practice has occurred in the last 10 years. Several new, minimally invasive techniques for treating have been described and come into general use. The main aim of these is to avoid surgical removal of varicose veins. The idea is to avoid the need for general anaesthetic, incisions in the legs and a hospital operating theatre leading to a much more rapid recovery from treatment. Ultrasound Guided Foam Sclerotherapy has become well established as a method of achieving long term cure of varicose veins.

The use of injections to cure varicose veins dates back more than 100 years. In 1942 Orbach described a method of creating a foam or froth with the solution he injected. He found that this increased the efficacy of injection treatment by five times. This method was used by a small number of surgeons but never found a great following.

In 1992 Juan Cabrera, a surgeon from Granada in Spain, found that he could greatly enhance the effect of injection treatment by making a foam of very small bubbles, which he called ‘microfoam’. He used ultrasound imaging to guide his injections into the main surface veins and found that he no longer needed surgical methods to treat his patients.

Over the last 15 years the use of foam injections has spread widely in France, Spain, Italy and Germany. It is now being enthusiastically taken up in several European countries, United States, South America, Australia and New Zealand. Experts in treating vein problems have used a number of different methods to create the foam that they inject but the result is the same: using a foam greatly increases the effect of the treatment without producing any additional side-effects.

A pharmaceutical company, Provensis, has commenced development of a foam called ‘Varisolve’. This is specifically intended to treat varicose veins. ‘Varisolve’ is currently only in use in clinical trials with licensing not expected until 2013. The National Institute for Health and Clinical Excellence has considered this treatment and published advice for patients considering undergoing foam sclerotherapy.

The solutions that are injected are exactly the same as those which are already used to treat varicose veins. These are mixed with a gas to create a mousse or foam consisting of very small bubbles. It has been shown that this is perfectly safe to inject into the veins. The air is rapidly absorbed from the veins
leaving the solution to treat the veins.

Why Does Foam Work?

When a solution is injected into a vein it is immediately diluted by the blood, reducing its efficacy. Foam pushes the blood out of the way and completely fills the vein: the foam is not diluted by the blood. In fact, far less solution has to be injected to obtain the same effect. Contact with blood strongly inhibits liquid or foam sclerosants so that they are only effective in the vein into which they have been injected. Once the foam reaches large veins and mixes with blood it is inactivated. The gas is breathed out and the sclerosant solution is metabolised by the liver within a few hours. Blood now returns to treated vein which has been left without its non-stick lining. Blood now sticks to the wall of the vein and blocks it off, which is usually a permanent cure for a varicose vein. 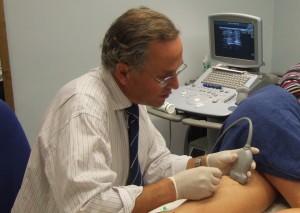 Treatment is usually performed in a treatment room or ultrasound examination room, and not an operating theatre. The patient rests comfortably on a bed. Very little discomfort results from the injections so no sedation or anaesthetic is required.

In order to treat large varicose veins it is necessary to block the main vein feeding the varices. This could be done surgically, but with foam treatment all that is necessary is to put a needle into the main affected surface vein. This is the only part of the procedure which might cause discomfort and is usually performed with a small amount of local anaesthetic. The position of the needle is carefully monitored using ultrasound imaging so that it is in exactly the right place.

Next, the foam is injected whilst watching its progress using the ultrasound machine. Surprisingly, injecting the foam causes no discomfort, although the leg may ache slightly afterwards.

The varicose veins in the leg are checked to see if foam has entered these from the main surface vein where the injection was given. A few further injections are usually given through a tiny needle in order to make sure that all the varicose veins have been completely injected. The whole treatment usually takes no more than 20 – 30 minutes.

Finally a firm bandage is applied to the leg. The aim of this is to keep the veins compressed so that they do no fill with blood when the patient stands up. The bandage is usually worn for a week or two followed by an elastic compression stocking for a further week.

When the bandages are removed at the follow-up appointment it is usual to find that all the varicose veins have gone. Sometimes small lumps can be felt beneath the skin. The leg may be a little bruised, although this is usually fairly minor. Lumps present at this stage slowly resolve over several weeks. If any varicose veins have not been completely treated in the first session they are injected and the leg bandaged to complete removal of all veins.

If varicose veins are present in both legs it is standard practice to treat them on separate occasions about two weeks apart. This avoids having both legs bandaged at once.

Who is Suitable for Foam Sclerotherapy?

Who Performs this Treatment?

Few surgeons in Ireland are experienced in this treatment at present. It needs a specialist who is skilled at ultrasound imaging as well as injecting veins. The Vein Clinic surgeons have considerable expertise in this field. 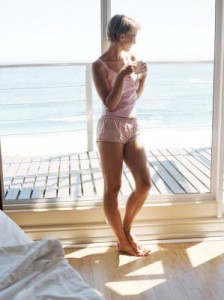 Several detailed clinical series have been published in the medical press. These suggest that 80 – 90% of saphenous veins (the main surface vein) are permanently occluded by this treatment when examined five years later using ultrasound imaging . This is similar to the success rate claimed for other new techniques such as VNUS Closure – Venefit  and Endovenous Laser Ablation (See: New Techniques). Surgery also has its failures and after two years further varicose veins may have appeared in about 10% of patients. Clinical trials which have compared surgery, foam sclerotherapy, laser ablation and RF ablation have found that the clinically assessed and patient reported outcomes are identical